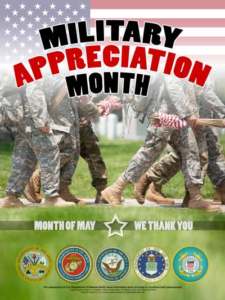 Please take this month to thank those who are serving and have served for their commitment and sacrifice.

Loyalty Day is May 1st. Loyalty Day kicks off our Nation’s month-long celebration of military appreciation. It is a day set aside for the reaffirmation of loyalty to the United States, and to reflect on the proud heritage of our American freedom.

Public Service Recognition Week is celebrated the first full week in May (May 6th – May 12th). A time set aside to honor the men and women who serve our nation as federal, state, county and local government employees and ensure that our government is the best in the world.

Victory in Europe Day AKA V-E Day or VE Day is May 8th. May 8th, 1945 is the day when Germans throughout Europe unconditionally surrendered to the Allies. This day marked the end of World War II in Europe.

Military Spouse Appreciation Day is May 11th. Traditionally set for the Friday before Mother’s Day. A day to honor military spouses with appropriate ceremonies and activities. Recognizes the important role our military families play in keeping our Armed Forces strong and our country safe.

Armed Forces Day is May 19th. Celebrated the third Saturday in May every year. A single holiday for citizens to come together and thank our military members for their patriotic service in support of our country. This day honors everyone serving in the U.S. Military branches; Air Force, Army, Coast Guard, Marines, Navy.

Memorial Day is May 28th. A Federal holiday observed on the last Monday in May. A remembrance of our the brave men and women, who died while in military service.

The month of May is characterized by these six national observances, which highlight the dedication and sacrifices of those who have served.